We asked Susan Edginton, one of our newest members for her feedback on the club so far, we were delighted with her response…. 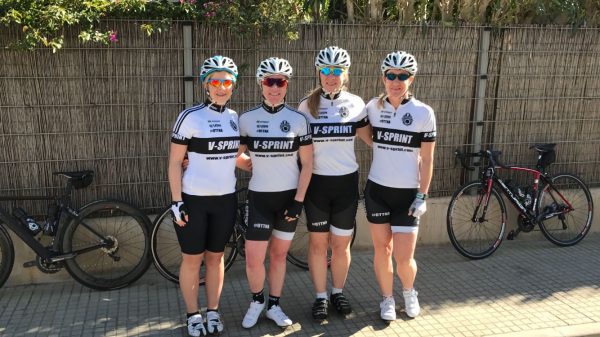 ‘I had always enjoyed cycling but for me it was always just a nice bike ride on a Sunday with the family with the odd charity sportive thrown in, I never once thought I was ‘good’ enough to join a cycling club. My husband had been badgering me for months to just give it a go, he had been riding with V Sprint for a few months and had heard they had launched a ladies group and so every Wednesday he would ask what my excuse was this week. In all honesty it was nerves. I could never keep up with a group, I couldn’t go on the front, I didn’t know how to move around the pack, how to call out obstacles, let alone do all of these things and actually remember to pedal!

But one week in August 2016, I plucked up the courage and went along, meeting up with complete strangers for the first time after only saying Hi on the whatsapp group. That first night, we did a steady 20 mile route around Hanbury and I was hooked! The group of ladies were lovely, they looked after me, gave me helpful tips and encouragement and the group leaders made sure everyone was safe and no one got left behind. The line I always remember is, ‘we are as fast as the slowest rider’. So that night, I got home and I didn’t shut up about how fantastic it felt to be in a group. My husband somehow refrained from saying, ‘ I told you so’ but the look on his face said it all.

So that was how it started for me but once you are in, it’s hard not to get caught up in the enthusiasm. I received an email about an annual training camp V-Sprint organise in Mallorca, I quickly read it but deleted it, I wasn’t anywhere near that level. This was November and 35 miles was my maximum level, I knew my limit and I was sticking to it. At least that’s what I thought. After one Sunday ride, I got talking to a few members in the group and slowly, I began to waiver. It would be nice to cycle in Mallorca, maybe I could go and just do a couple of days, see what it’s like, I wouldn’t have to cycle with the fast group, so before I could say no, I was signed up and my flights were booked. After a few months of cold but enjoyable rides with my training buddy Lis, who was also going to Mallorca for the first time, it was March and we were off. It came round so quickly and only 8 months after joining V-Sprint, I was off to cycle in Mallorca, how did that happen? Who knows, but I’m so unbelievably pleased that it did.

That holiday, sorry, training camp, was probably the most scariest thing I had ever put myself up for. I was completely out of my comfort zone but I was loving it at the same time. Over 5 days, I cycled 250 miles with the most amazing group of riders, some who I knew and some who I hadn’t met before but each and everyone of them looked out for me, making sure I stayed with the pack, giving me tips and more than the occasional push. Each night, we would talk about what we found tough that day and I quickly realised that everyone found it hard, it wasn’t just me. Yes, I was the weakest but that just meant I had to try harder and the group recognised that and applauded me, quite literally at the top of my first climb, for it. I was the slowest up the climbs but I just went at my pace, with no pressure from the others, just encouragement. I got to the top, I didn’t stop and I’ll never forget that sense of achievement.

The confidence and support that I gained from that week in Mallorca with V-Sprint has quite literally changed my mindset. It has made me appreciate that sometimes we all need a little push, we all need a little help and that if you find the right group of people, something that you once thought you couldn’t do, becomes something you find yourself encouraging others to do.’